Thank you for checking out my website. Are you looking for romance books with heart-pounding action and exotic locales?

Join the VIP List to get a free book and hear about new releases, contests, win free books, and exclusive goodies by clicking the yellow “Join VIP List” button. Note that you can unsubscribe at any time. I will miss you, but I want to send you gifts you enjoy receiving, not spam.

Falling for the Hero: A First Responder Anthology 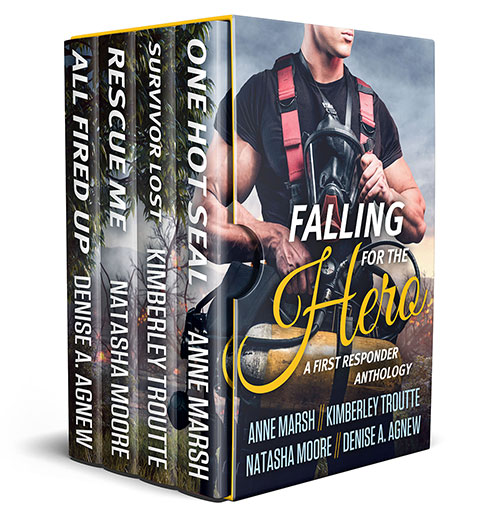 As Pilot in Command at Air Station, Sitka, Alaska, Lt. Dane Banner is comfortable taking control. Analyzing the crap out of every emergency to avoid mistakes means that his crew goes home at the end of their shift to kiss the people they love. Being in control keeps everyone safe, happy, alive. Dane likes his life that way.

But when June Harvey, his best friend’s widow, blows back into Sitka, desperate to pick up the broken shards of her life, his internal control panel goes as haywire as if she’s an electrical storm. He can barely navigate which way is up. Now that she wants to lean on him as if he were her only friend, how can he tell her he’s been in love with her forever? And that’s not the worst secret he’s determined to keep from her.

Any sane pilot would see the danger coming and fly like hell to avoid it. So why does he long to head straight into her storm?

“You’re worried that falling in love would dull your fighting edge?” Kat asked.

“Yep. I can’t risk it. I’m the explosions guy, remember? The team counts on me to be in full control of my edge. If my mind is elsewhere, we are all in danger. One little slip up on my part and kaboom, lights out, game over. I’ve got to stay in the game every second so that we all come home safely. That’s the only thing that matters—survival in the field.”

He shrugged. “I live today and the next today, and all the todays after that in the safe zone where it’s fun and games and no one gets hurt.”

But what happens when being apart hurts too much?

“We can make love all night. No strings.”

But will passion cost her everything?

Chloe Harper’s new job is convincing Brazilian pop legend and music executive Nicolas Medeiros to choose her family’s exclusive resort for his songwriting show. But one night with her girlhood crush leads to a fantasy affair neither wants to end—until dangerous family secrets threaten to expose their passion to a reality that could tear them apart… 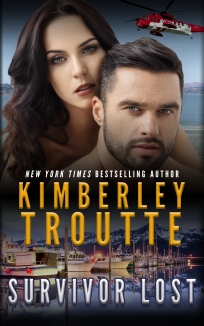 Complete novel that can stand alone.

Ex-SEAL and US Coast Guard aviation rescue swimmer Marcus Holt has never lost a victim to the frigid waters of Alaska until a rescue spirals out of control, and he loses a man he loved like a father. When the dead man’s sexy daughter—a former assistant district attorney from New York—blows into Sitka asking questions, Marcus admits she may just have a case to sue him. Too many things went wrong out there. And he can’t remember a thing.

Nicole Manning isn’t staying in Alaska long. She’s determined to find her estranged father’s secret accounts and correct the crimes he committed before he died. After that it’s back to New York to pick up her broken pieces. But she isn’t prepared for the rough-and-tough USCG swimmer who heads her off at every turn and makes her rethink…everything. Marcus stubbornly demands to take the blame for her dad’s death in order to protect the air crew. His strength and big heart tempt her to deviate from her get-out-of-Sitka-fast plans. Because Marcus himself is a man in need of a rescue, and Nicole is impossibly tempted to jump in feet first.

“I will get married…

But it sure as hell won’t be for love.”

A compromising viral video has ruined Jeffrey Harper’s reputation. But his father’s offer for a new start comes with strings. To develop a luxury resort at Plunder Cove, the celebrity hotelier must first settle down—with an arranged marriage. That suits the cynic fine, until aspiring chef Michele Cox whets his appetite for something spicier than a contract would allow…

Click the buttons below to go to the following booksellers:

I love hearing from readers. Please use the contact form.

As an Amazon Associate I earn money from qualifying purchases. #Commissionsearned